Edit
watch 01:36
We're Getting Mutants in the MCU - The Loop
Do you like this video?
Play Sound

The older Asaba twin. Yuta is more independent than his twin brother, Yuki, but they both like finding ways to make Kaname angry.

Yuta is the elder twin brother of Yuki, who are identical aside from the way their hair parts (Yuta's hair parts in the middle). Yuta is very slightly taller than Yuki, making both of them the tallest in the gang. Both are popular among girls, although Yuuta used to be more popular in elementary school. Unlike Yuuki, Yuuta wears a suit to school like the rest of them, but keeps the blazer open. In the manga, it was shown that Yuuta has a mole on his lower right hip.

Yuuta has been friends with Kaname and Shun since kindergarten. Yuuta is slightly more expressive than his twin brother, and is mostly described as being "cool" and the most mature of the group. He cares for all his friends and is very observant, he was the only one who realizes Yuuki has feelings towards a former worker in the cafeteria, Kayo and when Shun was troubled with his future, he was the only one who realizes something is off besides Azuma-sensei. He's good at drawing, studying, sports, and says his weakness is his brother (somewhat spoiling him). He's shown to have some feelings for Takahashi, a girl he went out with; they danced during the school sports festival of their third year, and he's received Valentine's chocolates from her, among other things. 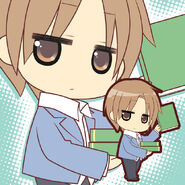 Could you tie my hair?

Translations from the Anthology